You may leave me a review on these links:

This was the case of MJ, a 70-year-old patient with multiple longstanding comorbidities who had been found to have a large left sided kidney mass.

Biopsies confirmed the presence of clear cell carcinoma, Furhman grade 2. The lesion was measured at 8cm in maximal diameter, therefore staged at T2N0M0.

The patient was offered a nephrectomy but was unable to accept this as it was felt they would not tolerate the surgical process or the recovery period.

After some research on alternatives to surgery, the patient and family requested a consultation with me at GenesisCare which took place via telephone call as the COVID-19 pandemic was in full swing.

Renal cancers have traditionally been thought of as resistant to radiotherapy. This theory no longer holds true in the era of modern image guided radiotherapy. Stereotactic Ablative Body Radiotherapy (SABR) in renal cancer yields very good results. In a study looking at single fraction SABR to 118 consecutive patients, the rates of local control, cancer-specific survival, and progression-free survival (PFS) were 97.8%, 95.7%, and 77.4%, respectively, at 2 years; and 97.8%, 91.9%, and 65.4%, respectively, at 4 years1.

When renal cancers arise in patients who are medically inoperable, or who wish to avoid surgery, and where focal ablation such as radiofrequency ablation is not indicated due to the size or position of the cancer in the kidney, SABR is a viable alternative that allows effective treatment in this older, largely medically inoperable cohort with clearly demonstrated efficacy, tolerability and modest impact on renal function in this patient population2.

The consultation touched upon the available evidence for SABR in renal cancers, particularly for those patients who do not wish to undergo an operation and therefore refuses this option, as was the case for this particular patient.

I explained about how our MRIdian service could help, particularly the machine’s ability to take MRI cine images during therapy, allowing us to track the movement of the tumour with respiration and “gate” the treatment, i.e. only turn on the treatment beam when the target is in the right place. The patient would be treated over the course of five treatment visits on alternate days.

The dose used was 40Gy in 5 fractions treating on alternate days.

The plan achieved ensured all parameters were met and all organs at risk were kept within tolerance, with special attention being paid to the contralateral kidney. 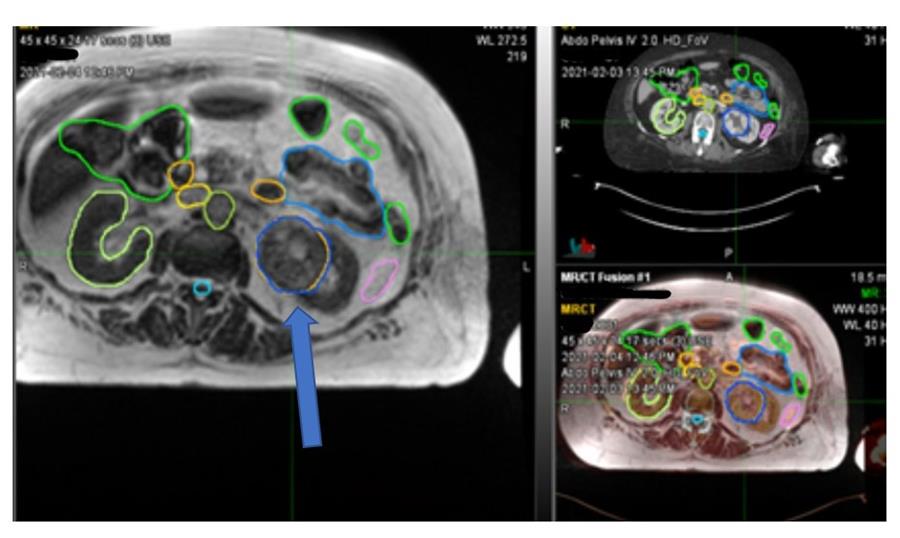 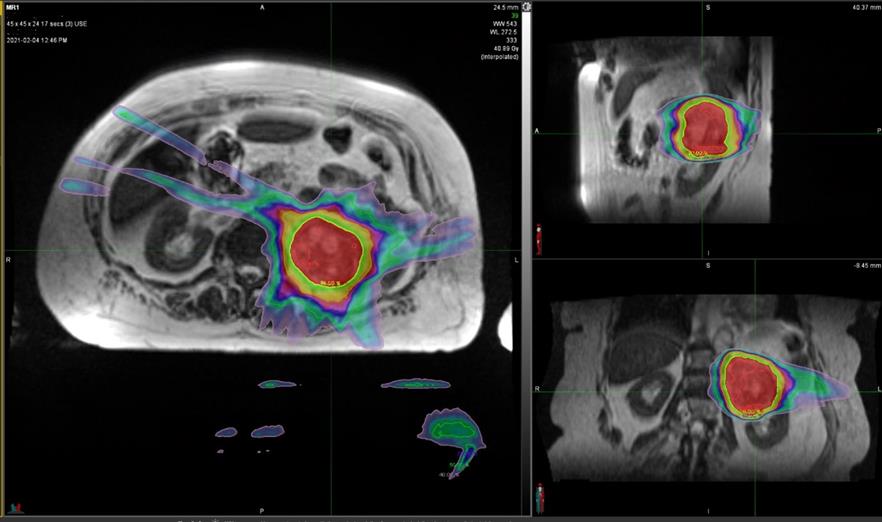 Figure 2 SABR plan to left renal cancer with sparing of the contralateral kidney.

MJ tolerated treatment well, developing mild frank haematuria after the second dose of treatment that lasted 24 hours. This did not recur again. Prophylactic simple anti emetics were prescribed for the duration of the treatment as the patient developed mild nausea as expected.

Despite being very anxious, MJ was able to settle into the treatment with the help of some oral anxiolytics and was able to complete all five doses of therapy without further incident.

Follow up will involve imaging although it is important to realise that renal cancers are recognised not to shrink visibly following stereotactic radiotherapy and often retain similar vascular perfusion patterns before and after treatment. The recommendation of international authorities is to delay initial scanning and to be aware of pseudo-progression which results from initial oedema within the target, mimicking tumour growth.

SABR is an established option for the treatment of renal cancers, allowing treatment of cancers in patients who would not be considered fit enough for an anaesthetic or who do not wish to undergo percutaneous ablation or nephrectomy.