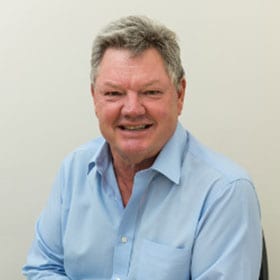 Prof Bryan Burmeister, is a Radiation Oncologist based at GenesisCare Fraser Coast and at the Hervey Bay Hospital.

Since 1997 he has been on the staff of the Faculty of Health Sciences, University of Queensland, where he is involved in teaching and supervising research.

Bryan speaks at both national and international meetings and has a major interest in clinical trials. His research achievements include being an investigator on more than 25 research projects.

Bryan has more than 30 proffered papers at learned society meetings and has published more than 130 journal papers. He also has a strong involvement in serving the professional community and has received several awards for his service.

Bryan has sat on a number of grant review panels and is a frequent manuscript reviewer for prestigious oncology journals.