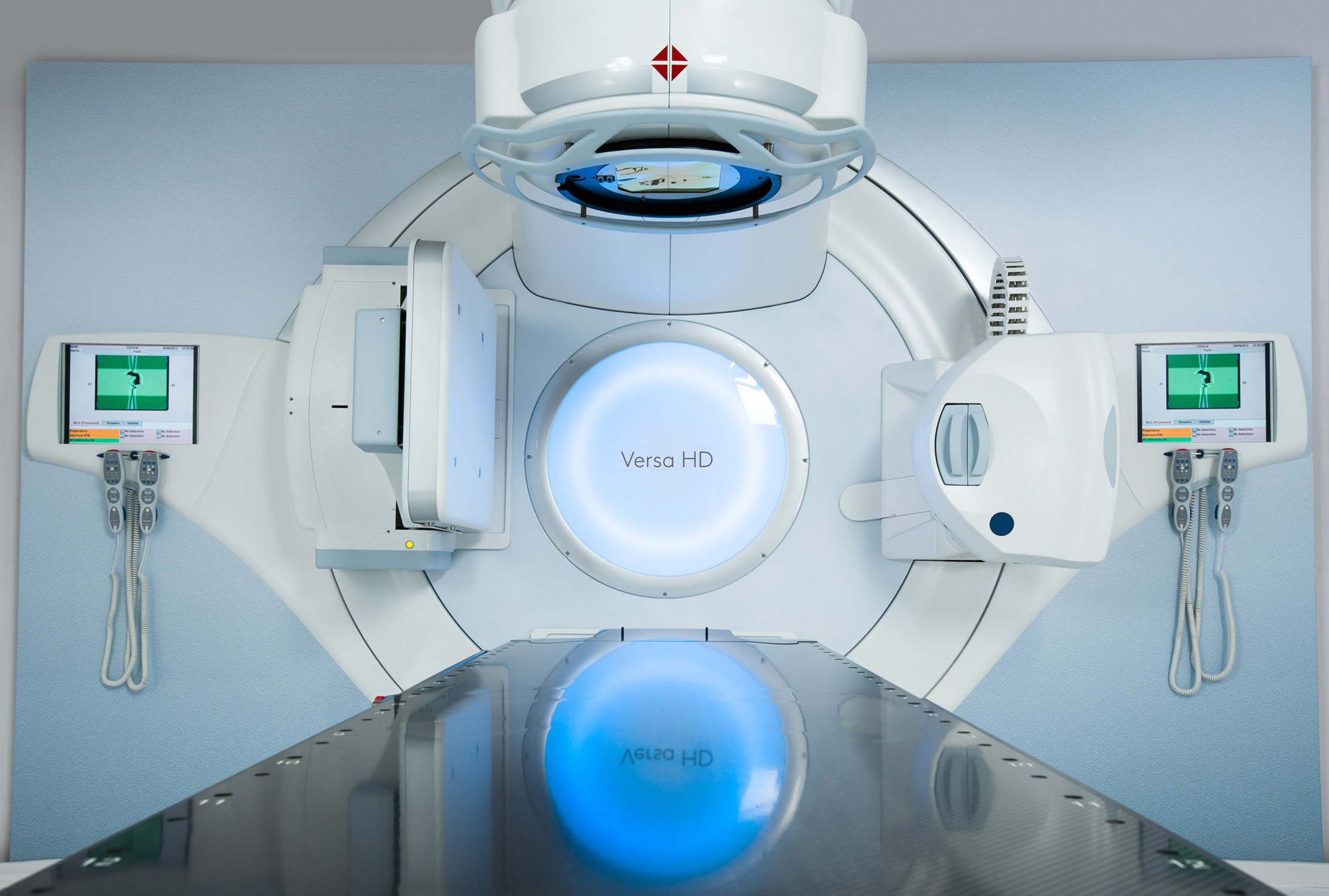 Delivers a highly precise and personalised dose to the target area while minimising dose to adjacent organs. Significantly improves treatment outcomes for many tumour types, including breast, prostate, head and neck, skin and palliative treatments.

VMAT is the next generation of intensity-modulated (IMRT), delivering a highly conformal radiotherapy dose by changing intensity as it moves around the tumour site. This reduces treatment time as well as the overall toxicity of treatment. VMAT is used to treat many cancer types. It is also used for palliative treatment as it preserves the opportunity for subsequent radiotherapy.

We provide VMAT to all suitable patients and use simple automation to create highly conformal plans for dosimetry.

A centre of excellence for SABR

Also known as stereotactic body radiation therapy SBRT, (SABR) is one of the most important advanced radiotherapy techniques currently available for the treatment of tumours such as in the lung and liver. It focuses beams of high-dose radiation at tumour sites with sub-millimetre accuracy – with the aim of achieving local control in just a few short treatments. There is a large body of evidence that SABR treatment given at the right time, to the right patient, can make a difference to outcome.[1] SABR, and stereotactic radiosurgery (SRS) for brain, are becoming the gold standard therapy for certain primary and many metastatic cancers, sometimes replacing surgery.

Stereotactic ablative radiotherapy, or SABR, targets intensely powerful beams of radiation to tumours in a highly conformal treatment. It targets with the aim of destroying cancer cells with minimal damage to surrounding healthy tissues.

SABR is an extreme hypofractionated treatment that can be delivered in just one to five fractions. It has revolutionised the treatment of tumour sites by offering an evidence-based alternative to surgery and to other invasive interventional procedures such as radiofrequency ablation (RFA), microwave ablation (MWA), irreversible electroporation (IRE, ‘NanoKnife’), and cryotherapy. Numerous studies have shown that SABR is highly effective in the management of primary and metastatic tumours, in particular inoperable tumours in the pancreas and liver; secondary tumours in the liver, lymph nodes, lungs, and bones; and recurrent cancer in the pelvis after previous radiotherapy. SABR may also be an alternative to surgery for prostate cancer, depending on the tumour stage.

How SABR works
SABR is an advanced form of precision radiation therapy that exploits the principles of the radiobiology of tumour cells. The high ablative doses used in SABR not only cause lethal damage to the DNA of cancer cells (as in standard radiotherapy), but also damage the tumour stroma (the basement membrane, fibroblasts, extracellular matrix, immune cells and vasculature). The combined effect is to significantly accelerate cell death (apoptosis).[3]

Compared to conventional radiotherapy, the ability of SABR to target tumour volume and yet avoid healthy tissue with sub-millimetre accuracy is critical to outcomes of treatment. For this reason, delivery of a SABR service requires significant investment in technology and expertise, together with a robust clinical framework. This is the foundation of the GenesisCare SABR centre of excellence.

SBRT is an advanced form of precision radiation therapy that requires significant investment in technology and expertise, together with a robust clinical framework. The GenesisCare SBRT service is led by a national team of leading SBRT specialists. Locally, all patients benefit from GenesisCare’s national protocols, plans and peer review.

Tumour specific SBRT lead doctors in each state – The role of the tumour lead doctors is to provide clinical oversight for a safe and effective SBRT service across the GenesisCare network.

National protocols – Standardised dose and fractionation schedules, based on tumour size and evidence-based best practice, is adhered to nationally.

High-quality imaging and set-up – Image guided radiation therapy (IGRT), based on cone beam CT verification, is used immediately prior to treatment for accurate patient set-up. These daily images are compared and matched with the 3D/4D CT data that was used for initial treatment planning.

Peer review and credentialing – All SBRT treatment plans are either peer reviewed and/or approved by a radiation oncologist credentialed in the specific tumour stream. This ensures the delivery of safe, evidence-based radiation therapy.

Worldwide care, delivered locally – GenesisCare is now a global organisation and Australia’s largest provider of radiation therapy with over 38 centres across the country. We collaborate with healthcare professionals who share the same values of fast access to world-class cancer care, delivered locally. Our commitment to the best possible outcomes for our patients includes investing early in new evidence-based modalities such as stereotactic body radiation therapy (SBRT).

Elekta Unity MR-Linac allows clinicians to adapt the radiation therapy in real-time as well as real-time tumour monitoring. This gives our team the visual confidence to reduce treatment margins, minimising the risk to healthy tissue, and expanding treatment options to those complex hard-to-treat cancers previously not possible.

An MR/RT is currently installed at St Vincent’s hospital Sydney.

Find out more about MR-Linac in the MR-Linac tab.

Elekta Unity MR-Linac allows our radiation oncologists to adapt the radiation therapy every day as well as real-time target monitoring. This gives our team the visual confidence to reduce treatment margins, minimising the risk to healthy tissue, and expanding treatment options to those complex hard-to-treat cancers previously not possible.

By capturing MR images of the target many times a second, the Unity provides real time moving images that capture the anatomical positional changes that occur naturally within the body. This allows tracking of the target position in real time, so that beam delivery can be paused when the target is outside of the treatment boundaries.

This level of accuracy means that uncertainty is reduced, eliminating the need for large margins around the target.

The Unity has opened up new avenues of treatment, particularly tumours that move and are within close proximity of organs at risk (OAR) such as tumours of the liver and pancreas, where high doses are achievable while keeping the doses to OARs within tolerance.

The evidence base suggests that the Unity makes it possible to achieve ablative doses without reaching prohibitive levels of toxicity, particularly in the abdomen. This offers the prospect of improving clinical outcomes for previously hard-to-treat cancers such as locally advanced or recurrent pancreatic cancer and inoperable liver tumours.

The evidence base for stereotactic body radiation therapy (SBRT) is growing and there is currently a range of clinical scenarios into which it can be integrated. At GenesisCare, we offer SBRT in the following situations:

All referrals will be assessed for a possible benefit of treatment using the MR-Linac. For example:

For other tumour sites, please refer to our MR-Linac team or contact them directly for more information.

We are committed to an environment of clinical excellence, objectivity and accountability. Our Processes are adapted from international best practice and our team has undertaken training with centres including Tubingen University Hospital, UMC Utrecht Cancer Centre as well as Elekta Training Centre, UK.

The introduction of the Unity has been overseen by a dedicated clinical and research team. The groups are comprised of clinicians, radiation therapist and physicists who have undergone extensive Unity training and have a vast cumulative experience of delivering highly technical radiation therapy.

The group also oversees research activity, developing joint protocols with our research partners. GenesisCare will treat more patients with MRIgRT than any other institute globally and will therefore be at the vanguard of translating research into everyday precision radiation medicine.

Find out more about MR-Linac

We use image-guided radiotherapy (IGRT) based on 3D cone beam verification immediately prior to treatment for accurate set-up. These are compared and matched with simulated X-rays taken directly from 3D CT data used for treatment planning. Our radiographers have extensive experience of CBCT interpretation and use of specialist positioning equipment to ensure submillimetre accuracy in set-up and minimal delay.

We use the latest surface-guided radiotherapy (SGRT) techniques in combination with VMAT or SABR to enable 3D and 4D set-up and superior motion management during radiotherapy.

The accuracy of radiotherapy is enhanced when combined with SGRT – a sophisticated stereovision technology that monitors thousands of points on the patient’s skin during set-up and treatment, unlike other commonly used systems that rely on CT imaging – further increasing radiation exposure.

This powerful system reduces positioning errors to improve the overall accuracy, as well as the speed and comfort of treatment.

These advances provide important benefits to our patients including the option of open-face treatment shells and tattoo-free treatments.

Stereotactic radiosurgery, or SRS, is often described as brain-area-sparing surgery. It delivers precisely-focused radiation beams at higher doses in a single or few short treatments and permits the maximum conformal dose delivery within the targets while minimising dose to the surrounding unaffected brain.

Recent studies are showing that treatment with SRS alone results in less decline in cognitive deterioration and better quality of life. Vitally this is achieved with no significant difference in overall survival.¹ SRS is now replacing conventional whole brain radiation therapy as the procedure of choice for some primary tumours and solitary or multiple brain metastases.

Brain metastases (secondary brain cancer) affect up to 30% of all cancer patients. Lung cancer, breast cancer, kidney cancer and melanoma are the most common primary tumours that metastasise to the brain.

Stereotactic radiosurgery (SRS) has become increasingly recognised world-wide as the as the gold standard radiotherapy option by professional societies, based on a growing evidence base for the use of SRS alone for a patient presenting with one to four brain metastases.2

SRS is routinely used in re-irradiation after brain radiotherapy or previous SRS.

SRS is also indicated for:

Gamma Knife Radiosurgery is a highly advanced non-invasive option for both malignant and benign intracranial conditions.

The Gamma Knife is widely recognized by some as the gold standard in radiosurgery due to its long history of use as a radiosurgical modality and the vast amount of literature reporting on clinical efficacy and safety.

Gamma Knife radiosurgery delivers 192 collimated Cobalt- 60 beams to one or more targets in a single session, with submillimetre accuracy.

Fractionated treatment (multi session up to 5 sessions) can also be delivered using a frameless technique.

SRS vs WBRT: A summary of the evidence

Gamma Knife is not necessary for all patients, so the purpose of the MDT is to discuss and review individual cases to explore all possible treatment options before Gamma Knife treatment is approved.

Find out more about gamma knife

We are leading the introduction of Deep inspiration breath hold (DIBH) with VMAT radiotherapy for left-sided breast cancers and complex right-sided cancers when regional nodal irradiation (IMC VMAT) is required. This innovative response to tumour motion provides superior protection of the heart and lung, and improves patient comfort compared with spirometry.

Spacing gels, such as SpaceOAR® Hydrogel, are a game changer in protecting the rectum from toxicity in prostate radiotherapy. The gel is inserted between the rectum and the prostate to temporarily move the anterior rectal wall further away from the prostate. The aim is to reduce the amount of radiation delivered to the rectum and limit toxicity. The gel lasts for the entire course of prostate radiotherapy treatment and is completely absorbed by the patient’s body over time.

Management of skin cancers in the current environment

As a result of the extreme pressure being placed on the public health system, a growing number of operations for non- melanoma skin cancer being delayed or cancelled.

For suitable patients, radiation therapy may offer an alternative option to surgery, with modern techniques such as VMAT (Volumetric Modulated Arc Therapy) showing efficacious and well-tolerated results with local control rates in the order of 90-95%.¹

Suitable patients include those with aggressive primary or recurrent BCCs and SCCs, or superficial melanoma. In particular, where it relates to the elderly, those with comorbidities or where undue treatment delay (3-6 months or more) would be problematic.

Australia has one of the highest skin cancer rates in the world with almost half a million people treated for one or more non- melanoma skin cancers (NMSC) each year.² These skin cancers are commonly found on the most sun-exposed parts of the body, including the head, neck, and face.³