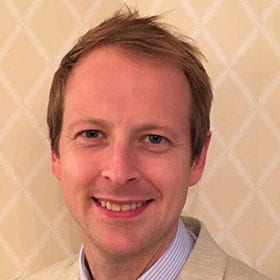 William Gietzmann is a Consultant Urological Surgeon who subspecialises in open and minimally invasive renal cancer surgery. He also offers a comprehensive service of general urology and uro-oncology including benign prostate surgery.

He began his medical training at the University of Cambridge gaining his intercalated degree in Medical Sciences and the History and Philosophy of Science in 2007.

He completed his clinical studies at Guy’s King’s and St Thomas’ Medical School, London graduating in 2010. He undertook his core surgical training in Sussex before completing his higher surgical training in the East of Scotland rotating through hospitals in Aberdeen, Edinburgh and Dundee.

After undertaking a locum consultant post at the Aberdeen Royal Infirmary he moved to Oxford to take up his substantive post. He is actively involved in collaborative research having been appointed an honorary clinical lecturer at Aberdeen University.

He has worked on several large systematic reviews including papers on behalf of the European Association of Urologists Guidelines Panel and lead authorship of a Cochrane Review.