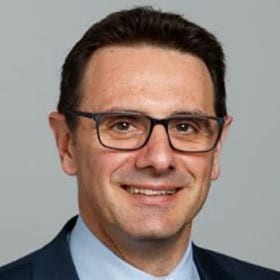 Dr Mario Guerrieri has been part of Radiation Oncology Victoria (ROV) since 2004 and GenesisCare since it amalgamated (with ROV) in 2011. He previously worked as a staff specialist at the Peter MacCallum Cancer Centre and The Alfred.

He has developed sub-specialist interests mainly in the area of pelvic malignancies (prostate cancer and rectal cancer), breast cancer and thoracic malignancies. He works closely with surgeons and oncologists in these cancer streams to deliver personalised, state of the art care in these common but complex malignancies. He is closely aligned with and attends the multidisciplinary meetings at Cabrini, Western Health, and the Australian Prostate Centre.

He has been instrumental in setting up brachytherapy services in the Western Suburbs of Melbourne for the treatment of prostate cancer in 2008. In the search to continue to drive success rates and reduce toxicity for prostate cancer treatment, he has implemented intensity modulated radiation therapy (IMRT), subsequently volumetric modulated arc therapy (VMAT) and then image guided radiation therapy (IGRT) using implanted fiducial markers and spaceOAR. This has only been possible with close collaboration with local urologists.

Working closely with his breast surgical colleagues, he has also helped introduce a radiotherapy protocol to optimise breast cancer local control rates and improve cosmetic and patient reported outcomes in those women requiring a mastectomy and reconstruction.