We have seen an increase in the adoption of SRS to brain metastases across the UK. Especially since NHS England decided to streamline SRS services and commissioned 17 centres in the UK to deliver this.

SRS now offers focused ablative treatment for the metastases for an increasing range of indications .

SRS is preferred to surgery in most cases where no histology is required, small multiple metastases or where tumours are located in eloquent areas of the brain. SRS provides local metastases control at 1 year in 70-90% of cases. In addition, level 1 evidence confirms that SRS increases overall survival and patient quality of life (1,2) when used in conjunction with whole brain radiotherapy.

Given the improved survival in general for cancer patients due to the new and effective biological therapies, controlling brain disease is key.  The combination of surgery and SRS offer excellent local tumor control where patients have good extracranial disease control and prognosis with limited number of brain metastases (£ 10 metastases).

The role of WBRT has become increasingly narrow with the availability of more active systemic treatments for brain metastases (Capecitabine, Ipilumimab and Nivolumab). WBRT still has a role for patients with leptomeningeal disease, multiple (> 10) metastases, cases where surgery or SRS are not indicated and still have moderately good performance status, when SRS is not available and SCLC with brain metastases.

Which patients are eligible for Stereotactic Radiosurgery to brain metastases?

(*) Yamamoto et al (3) showed that there was no difference in overall survival when treating with SRS 2-4 vs 5-10 brain metastases, concluding that SRS will be preferred to WBRT when there are multiple brain metastases given, as well, the impairment proved and produced by WBRT compared against SRS.

Can we treat a patient with SRS more than once?

What are the contraindications for SRS?

A 46 years old man with a known renal cell carcinoma, previously had a good response to immunotherapy. He had a performance status 0-1 and presented with seizures. A CT scan and MRI was performed showing multiple brain metastases.

The case was referred to the GenesisCare Neuro-Oncology MDT with a decision that SRS was best option. The patient was successfully treated with SRS to 9 brain metastases in a single visit.

The patient was seen 6 weeks after treatment, continuing with immunotherapy for his extracranial disease, on low dose steroids and without any focal neurology and performance status 0. 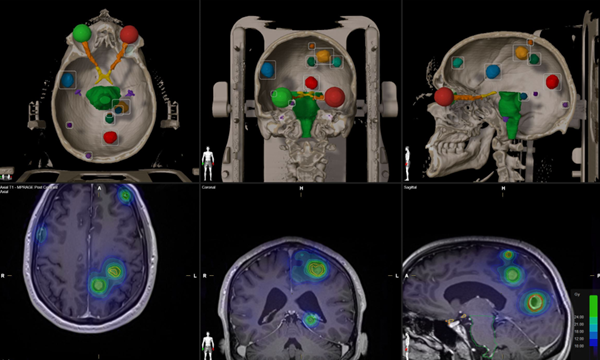 Refer and treat your SABR patients with confidence