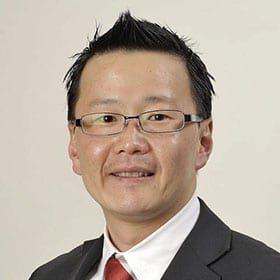 Michael is a Professor of Radiation Oncology specialising in breast, lung and prostate cancers.

He has over 22 years of experience as a radiation oncologist. His particular area of expertise is in prostate brachytherapy (which includes both Iodine-125 low dose rate (LDR) permanent seed implants and Iridium-192 high dose rate (HDR) temporary implants) and rectal spacers for prostate cancer which he introduced in 2013. He has now completed more than 1000 prostate cancer implants and more than 800 rectal spacer procedures. In addition, he has a major interest in the use of preoperative radiotherapy for locally advanced breast cancers prior to breast reconstructions and also for early disease where he is leading innovative partial breast treatments.

Michael completed his MBBS at Monash University in 1991 graduating with Honours. He received his Fellowship of the Royal Australian and New Zealand College of Radiologists (FRANZCR) in 1999. This was followed by two years as a research fellow at the DNA Research Laboratory at the Peter MacCallum Cancer Centre. He was both an NHMRC Scholar and Sir Edward ‘Weary’ Dunlop Research Fellow. He has also completed his doctorate (DMedSc) with the University of Melbourne.

He has a strong commitment to research with more than 90 publications and supervises a number of PhD and MPhil students. He commenced as a consultant radiation oncologist in 2000 joining Genesis Care Victoria. He consults at the Ringwood and Frankston Genesis Care Radiation Oncology Centres. He is both an honorary radiation oncologist at Maroondah Hospital (Eastern Health) and VMO at the Olivia Newton John Cancer and Wellness Centre where he is the breast cancer lead.