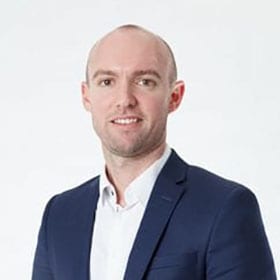 I listen, assess & use my knowledge to ensure that every individual achieves the best possible outcome in a caring & compassionate environment.

In 2009, Craig moved to WA to further his experience and it was here that he developed an interest in radiation oncology whilst working at Sir Charles Gairdner Hospital.  In 2013, he moved to Melbourne to undergo specialist training in radiation oncology at Geelong Hospital and then The Peter MacCallum Cancer Centre.

A fellowship in 2017 at the Austin Hospital in Melbourne enabled Craig to further sub-specialise in head and neck cancers, skin cancer, stereotactic radiation therapy and clinical research. Here, he set up phase II trial in stereotactic radiation therapy for pancreatic cancer. His first position as a consultant was at Ballarat Hospital, but with his wife’s family located in Perth, he could not pass up the opportunity to move back to WA to be closer to loved ones.

When not at work, Craig enjoys swimming, football and spending time with his wife, friends and family.

Craig treats all adult solid tumours and developed particular interests through his fellowship training in head and neck cancers, skin cancer, pancreatic cancer, stereotactic radiation therapy and clinical research.  In 2016, he published a paper on low dose rate brachytherapy outcomes for prostate cancer, and has a book chapter, other papers and oral presentations pending.