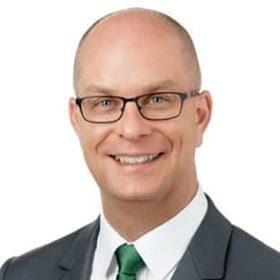 Dr Andrew Potter studied at the University of Adelaide, graduating with a Bachelor of Medical Science (Honours) in 1998 and Bachelor of Medicine and Bachelor of Surgery in 2000. He undertook his specialist training in Radiation Oncology at the Royal Adelaide Hospital, before working as a Clinical Research Fellow at the Princess Margaret Hospital in Toronto, Canada, from 2008-2009 where he was awarded the RS Bush Award for Academic Excellence.

Dr Potter returned to Adelaide as a Consultant Radiation Oncologist at the Royal Adelaide Hospital in 2009. There he worked in a multidisciplinary cancer centre, developing sub-specialty expertise in stereotactic radiotherapy, treatment of children and young adults with cancer, and disease sites including melanoma, sarcoma and malignancies involving the haematological and central nervous systems.

He maintains a clinical interest in all diseases where radiation therapy can be applied, including breast, lung, prostate brachytherapy, skin, gynaecological, central nervous system, haematological cancers and stereotactic ablative body radiotherapy and radiosurgery.

Dr Potter is closely involved in education and training of radiation therapy students, medical students and radiation oncology registrars. He lectures at the University of South Australia and is an examiner for the RANZCR Faculty of Radiation Oncology.

Dr Potter also supports a variety of research activities, including supervision of Honours and PhD students, clinical trials, and contributing to more than a dozen peer-reviewed research papers.