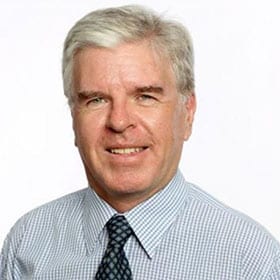 Nuclear Medicine is a unique and interesting specialty combining diagnostics and treatment. It is an incredible period of growth currently

Paul played a key role in the introduction of SPECT/CT technology in Australia as well as the installation of northern Sydney’s first PET Scanner (at Royal North Shore Hospital) in 2010. He also played a key role in RNSH being recognised as a ENETs Centre of Excellence in neuroendocrine tumours, one of the few institutions outside of Europe awarded this status.

He is a past President of the Australasian Association of Nuclear Medicine Specialists (AANMS), and played a key role in securing Medicare funding for PET scans in patients with breast cancer, as well as securing Ga68 Dotatate PET/CT funding in patients with neuroendocrine tumours.

Paul has a national and international reputation in various aspects of Nuclear Medicine, particularly in pulmonary imaging and he has over 100 peer-reviewed publications in various national and international journals. He has been involved in numerous research studies related to theranostics in neuroendocrine tumours and prostate cancer, and was lead author on the world’s first large multicentre study assessing the management impact of Ga68 PSMA PET/CT scanning in patients with prostate cancer. He has been an investigator on major interenational trials related to prostate cancer, including TheraP and the ALSYMPCA trial.